The ferries last carried passengers on 04-September-1964. A revised time table and protocols had to be followed on that day. The closure of the Queensferry Passage and the opening of the Forth Road Bridge was a huge occasion for the men who worked on the ferries.
To ensure their families were given an opportunity to view the formalities, passes were issued. An album can be viewed which shows photographs of the ferries last trip. 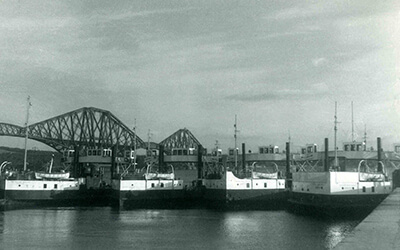 The fate of each of the ferries following the opening of the Forth Road Bridge was as follows:-

Robert The Bruce - Scrapped at P and W McLellan at Boness in 1965.

Mary Queen of Scots - Scrapped at T W Ward at Inverkeithing in 1965.

Queen Margaret - Scrapped at T W Ward at Inverkeithing in 1965.

To celebrate the opening of the new road bridge First Day Covers were produced. Two on display here were written by Captain John Penny to his son. Other first day covers are on display, each with has an interesting history, these were kindly supplied by Kerr Doig.