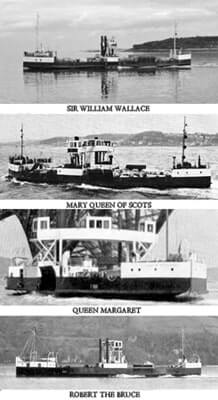 The four vessels are very similar, if the names on the hull are not visible how can each be identified?

The photographs aside may help as will reference to the images in the Gallery section of this site.

The clues to look out for are the last two ferries built have diagonal steps running from the paddle housing to the wheel house. The earlier vessels have vertical steps. The Sir William Wallace and the Mary Queen of Scots can then be identified as the Wallace is larger, this results in a longer gap between the paddle housing and the ramp. 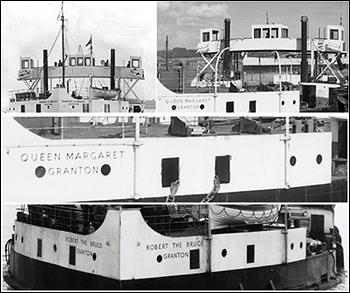 It is still difficult to separate the two older vessels however Ian Campbell the son of Duncan Campbell an Engineer on the ferries came up with the solution.

"On the Bruce the main access ladder was forward of the bridge, and aft of the bridge on the Margaret. Even more visible from a distance was the arrangement of the saloon windows. Margaret had an even spacing of 2 portholes, 2 square windows and 2 portholes. On the Bruce there was a porthole between the two square windows, and only one porthole on each side for the store over the rudder." 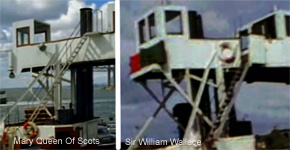 The Sir William Wallace and the Mary Queen of Scots have diagonal steps but they are not the same as the photos aside show. The Mary's steps go to the top of the Bridge while the Wallace's go to floor level of the Bridge. Many thanks to Stephen Reid skipper of the Robert The Bruce for this information.