Several photographs of the ferries show a signal was carried on the mast. The purpose of this signal Three Vertical Balls has proved difficult to determine. Assistance was sought from various forums dealing with shipping and the following explanations were offered:-

- indicates a vessel navigating stern foremost - it should signify a vessel aground in or near a fairway.
- Rule 11 paragraph (e) three black balls in a vertical line, ship aground.
- usually indicated on restricted waters a cross trade (Ferry?), so the three balls maybe is the daylight signal according to local pilotage laws?
- Rule 4. A vessel engaged in laying or picking up cable or a navigation mark, surveying or underwater operations, or a vessel engaged in replenishment at sea or in the launching or recovery of aircraft carries, in lieu of her steaming lights, two all-round red lights with an all round white light between them, each visible at least two miles. Perhaps an adaptation of this, the vessel in question having limited ability to manoeuvre. 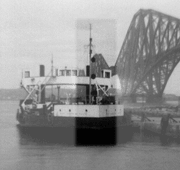 However the most likely explanation comes from Ian Campbell who helped with the explanation on how to identify individual each ferry. Ian advises :-
"The 3-ball signal doesn't exist in current "Collision Regulations", but I was told they indicated that the ferries would give way to river traffic in both directions.  Otherwise, for example, a westbound tanker going to Grangemouth would have to give way to a northbound ferry. And that fits with the fact that the balls were removed for travel to and from Leith for annual overhaul. Incidentally, Dundee never carried these 3 balls, but perhaps that was just because it had no mast. The possibility that the balls indicated navigating in reverse (not true). So far as their appearance was concerned, northbound ferries were not in reverse. They had double sets of navigation lights which were switched over for each direction, and for daylight journeys there were both green and red panels on each end of the bridge. Again, Dundee was the exception, but it turned round for the northbound journey."