Queensferry Passage ferries on River Forth.

The ferries that operated up to 1964 were the, Sir William Wallace, Robert The Bruce, Queen Margaret and the Mary Queen of Scots. Although ferries operated a long time before 1934 this website covers the period starting when on 29-01-1934 both the Robert The Bruce and the Queen Margaret were launched. The Queen Margaret had a riveted hull. The Bruce was the first ship to be completely electrically welded. Both vessels cost £22,000 to build. They were launched at the Leven shipyard on the River Clyde which was owned by Messer's Wm. Denny and Brothers, Dumbarton Scotland. This firm also operated the ferries up to 1964.

All these ships were Diesel - Electric, Paddle Boats of 217 tons gross. The double ended design incorporated a rudder at either end which helped maneuverability. They were technically advanced for their time and more details of the technical specifications can be found in later pages.

Many of the items on display in this site were in the possession of the late Captain John Penny who was the Master of the Sir William Wallace. Capt. John Penny was employed on the ferries from 1946 and was a Master of the Wallace from 1956.

If you would like to contact me direct please use the email address shown below.
Photographs of the ferries are difficult to find but by searching the internet and obtaining the appropriate permissions a collection has been built up and can be viewed by clicking on the image below. 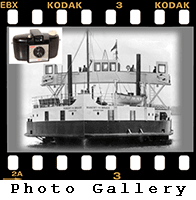 In addition to photographs this web site contains details of many aspects of the ferries including original documents and videos. These can be viewed over the following pages. A guide to the contents of the site can be found by using the Site Map. You can also navigate through the site using the Next And Previous buttons above.

RAFPilotLogBook.co.uk This site looks at the flying career of Robert "Bert" Penny.